Disgruntled former Hamas employees rioted on Tuesday as they forced their way into government offices, destroying property and setting government vehicles on fire. A group of former employees in the Hamas-run government in Gaza went on a hunger strike Tuesday following a day of violent protests over unpaid salaries, Palestinian news agency Ma’an reports.

The employees were fired following the establishment of the Palestinian Authority (PA)-Hamas unity government more than six months ago. They have reportedly been waiting for their unpaid wages ever since.

The disgruntled former employees rioted on Tuesday as they forced their way into government offices, destroying property and setting government vehicles on fire, Ma’an reports. There were no injuries.

The Palestinian government condemned the protest, saying that demonstrators threatened ministers and damaged their cars.

An employees’ union official told Ma’an that former civil servants are holding sit-in protests inside the Palestinian cabinet’s headquarters until their salaries are paid.

“Our sit-in is peaceful and we do not want to destroy public property, but we will stay here until our members are recognized and their salaries paid,” Khalil al-Zayyan said. “They can no longer support their families. This is unacceptable.”

Hamas spokesman Sami Abu Zuhri alleged that the government discriminates between employees in Ramallah and in Gaza. All the fired employees are members of Hamas, which rules the Gaza Strip.

Since striking a unity deal, Hamas been demanding that the new government pay the salaries of the 50,000 civil servants it had recruited after its violent takeover of the Strip in 2007.

“We’ve had enough of the false promises. Either the government resigns or it takes all of Gaza’s responsibilities, like in the [PA-administered] West Bank,” Zayyan said. 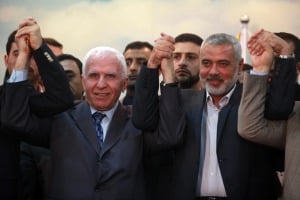 Tensions between Hamas and Fatah, the PA’s ruling party, have been running high ever since the establishment of the unity government. Both sides have made mutual accusations of corruption, graft and treason.

In December, a spokesman for the PA’s Ministry of Health accused his employees in Gaza – likely Hamas government officials – of stealing medications and medical equipment designated for patients in the Gaza Strip.

Fatah members were attacked in December by Gaza residents during their visit there.

Fatah spokesman Ahmed Assaf stated in September that Hamas received vast sums of money donated by Muslims from around the world during Operation Protective Edge but did not use the funds for the benefit of the civilians.

Hamas has accused the PA of stealing funds designated for the rehabilitation of Gaza. On the other hand, a Reuters report from December points out that it is difficult to transfer money to Gaza because Hamas, a corrupt Islamist terror organization, rules the Strip.