In a quest to secure its offshore gas rigs, Israel will purchase four corvette ships from a German company. Israel has signed an agreement to purchase four advanced battleships from Germany in order to secure its offshore gas fields, Israel’s Ministry of Defense (MOD) announced on Monday.

The 430-million-euro purchase is part of Israel’s effort to secure the gas rigs in its economic waters – an offshore region that includes gas-drilling areas, extending beyond Israel’s territorial waters in the Mediterranean. The first ship will be turned over to Israeli hands in five years.

Germany’s TKMS shipyard in Kiel will provide the Israeli navy with four advanced patrol corvettes, which will become part of the defense parameter.

All combat systems used on the ships will be produced and outfitted by Israeli companies at the insistence of the MOD, which aims to ensure the flow of contracts to Israeli firms.

Germany has agreed to finance a third of the cost of the deal at 115 million euros. TKMS, which is building the battleships, has promised to purchase Israeli products in return and invest in Israeli companies.

“The agreement signed today is a significant and dramatic step forward in the navy’s defense capabilities on Israel’s strategic gas-yielding sites,” Harel said after the signing.” The deal also serves as a boost to the economy. We are proud and happy with the results of the negotiations, which have ensured maximal achievements in the operational and economic spheres.”

Commending the ties between the two countries which were unthinkable 70 years ago, Minister of Defense Moshe Ya’alon said that the collaboration between Israel and Germany was strong, “based on a shared vision of the threats facing the countries and the West.”

“We are proud to share with you our military experience and intelligence,“ Ya’alon told his counterpart at a press conference.

He underscored appreciation to Germany for its contribution to the security of Israel’s citizens. “The ties between the two countries have aided the IDF’s building of its strength tremendously and have cemented its status as a modern army.” 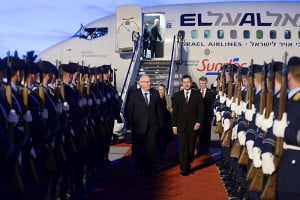 Relating to the patrol corvettes, he said they were among the most advanced in the world, and their purchase set Israel’s navy in the front line with the other leading maritime powers.

He conveyed his personal thanks to Chancellor Angela Merkel, “a true friend of Israel.”

One of the byproducts of this relationship is close military collaboration. Germany recently approved the delivery of the fifth of six advanced submarines Germany had promised to Israel, which were likewise constructed by TKMS.

Israel received the fourth submarine in September, another step in a seven-year joint submarine project between Israel and Germany.