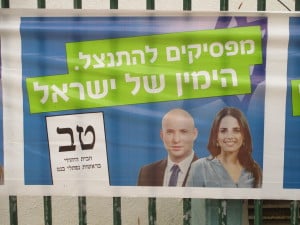 Israeli Prime Minister Benjamin Netanyahu’s new coalition has yet to prove itself, but the Palestinians have already condemned it for being “against peace.”

Israeli Prime Minister Benjamin Netanyahu eked out a government coalition less than two hours before the extended deadline set by President Reuven Rivlin. The premier hopes to expand the coalition in the coming days.

The new coalition has the bare minimum of 61 seats out of the Knesset’s 120 necessary to form a majority. In a last-minute coalition agreement, Netanyahu appointed Jewish Home party head Naftali Bennett as education minister; MK (Member of Knesset – Israel’s parliament) Ayelet Shaked will serve as justice minister and MK Uri Ariel will receive the Agriculture portfolio.

Netanyahu expressed a desire to expand his coalition beyond 61 seats in order to give his government more stability. Under the current situation, unanimity will be required to pass laws, and the defection of just two MKs would cause the collapse of the entire government.  “Sixty-one is a good number,” he said. “Sixty-one-plus is an even better number. It begins with 61. We’ve got a lot of work ahead of us.”

This statement, combined with the fact that Netanyahu has yet to announce a foreign minister to replace Avigdor Lieberman, led to speculation that Netanyahu hoped to convince opposition leader and Zionist Union head Isaac Herzog to join the new government. However, Herzog decried the new government as “the weakest, narrowest and most prone to extortion coalition in the history of Israel.” He particularly criticized the appointment of Shaked, who has limited political experience, to the justice portfolio and accused Netanyahu of putting coalition-building ahead of the interests of the State of Israel. A Likud spokesman also denied that Herzog would be approached. Undersecretary of State Wendy Sherman. (US Department of State)

While coalition negotiations were still underway, US officials also weighed in on their opinion of the matter. “If the new Israeli government is seen as stepping back from its commitment to a two-state solution…that makes our job in the international arena a lot tougher,” said Undersecretary of State for Political Affairs Wendy Sherman.

The Obama administration has made no secret of its disdain for Netanyahu. Obama said after the election that the US “needs to rethink our approach” towards Israel and the peace process. US Ambassador to the UN Samantha Power confirmed that this could include advancing anti-Israel resolutions at the UN. The US Senate is even investigating the possibility that the State Department directly funded the Victory 15 campaign to unseat Netanyahu.

Chief Palestinian negotiator Saeb Erekat condemned the new government, saying that it “will be one of war which will be against peace and stability in our region.”

“This government will set its sights on killing and reinforcing settlement activities,” Erekat stated.

Israeli-Palestinian peace negotiations ended in April 2014, when the Palestinian Authority formed a unity government with Hamas, a terrorist organization that does not recognize Israel or any Palestinian agreements with Israel, in violation of the Oslo Accords.

US President Barack Obama congratulated Netanyahu on Thursday after he forged a new coalition government.