There are four cities in Judaism that are referred to as “The Holy Cities.” These are: Jerusalem, Hebron, Safed, and Tiberias. In this article we will briefly discuss some of the highlights of each one.

Jerusalem, of course, has been the holiest city in Judaism and the spiritual center of the Jewish people since the 10th century BCE, when it was chosen by King David, with the assistance of Samuel the Prophet, to be the site of the Holy Temple. 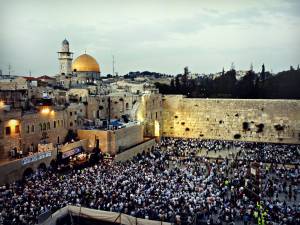 Thousands praying at the Western Wall in the Holy City of Jerusalem.

During its long history, Jerusalem has been destroyed twice, besieged 23 times, attacked 52 times, and captured and recaptured 44 times. The familiar walls of the Old City aren’t that old. They were built in 1538 by the Turks. Indeed, the original walls of Jerusalem enclosed a much larger territory than they do today. Modern Jerusalem has grown far beyond the Old City’s boundaries.

All branches of the Israeli government are located in Jerusalem, including the Knesset (Israel’s parliament), the residences of the Prime Minister and the President, the Bank of Israel, and the Supreme Court.

No doubt the most famous site in Jerusalem is the Kotel (the Western Wall) and the Temple Mount, known in scripture as “Mount Moriah.” According to Jewish tradition, many major historical events took place on the Temple Mount. It was where the creation of the world began, where Abraham almost sacrificed his son Isaac, as well as where Jacob dreamed about angels going up and down a ladder.

Hebron is the burial place of most of the Jewish patriarchs and matriarchs: Abraham, Sara, Isaac, Rebecca, Jacob, and Leah. Cave of the Patriarchs in Hebron. (Photo: shalomisraeltours.com)

As such, Hebron is the second-holiest city to Jews. It was also one of the three cities purchased on behalf of the Jewish people by Biblical figures (Abraham bought Hebron from the Hittites, King David bought Jerusalem from the Jebusites, and Jacob bought Nablus from the Shechemites). Hebron was the first capital of the Jewish people before it was permanently moved to Jerusalem.

Safed (Tzfat) came to be regarded as a holy city after the influx of Jews following the expulsion from Spain in 1492. It became THE center of kabbalistic scholarship. A number of famous and holy rabbis are buried there, and their graves are a focus of pilgrimage, such as Rabbis Hayyim Vital, Isaac Luria, Shlomo Alkabetz, Joseph Karo and Moshe Alshich, among others.

Tiberias was significant in Jewish history as the place where the “Jerusalem Talmud” was composed, but its status as a holy city was due to the influx of rabbis who established the city as a center for Jewish learning in the 18th and 19th centuries. According to one legend, the final redemption will begin in Tiberias, with the Messiah coming forth from there. The tombs of Rabbi Akiva, Rabbi Yohanan ben Zakkai, Moses Maimonides and other famous rabbis are also a focus of pilgrimage visits to the city. One of the famous legends of Tiberias is that when Maimonides’ body was brought to Tiberias for burial from his home in Egypt, the camel carrying his remains stopped next to the grave of Rabbi Yohanan Ben Zakkai. And it was there that they decided to bury him.