Israel is on high alert following a reported IAF attack on Hezbollah terrorists in Syria.

Reports indicate that the Hezbollah cell was planning mass terror attacks against Israel to be launched from the Golan, and has already acted against Israeli military targets.

Where did Israel get its intelligence on the Hezbollah terror cell? Sources have speculated that Syrian rebels may have fed Israel with the necessary information.

The Shi’ite Hezbollah was operating in the Quneitra region, which is controlled by the Sunni al-Qaeda affiliated al-Nusra front, and as both are bitter enemies, Hezbollah was actually operating out of enemy territory. The al-Nusra Front may have provided Israel the intelligence needed, possibly through a third party, and by doing so helped eliminate their own enemy.

This attack is perceived as a huge military and intelligence success by Israel, and a serious loss for Hezbollah.

Israel has gone on high alert since the attack, anticipating a retaliatory attack by Hezbollah.

The Lebanese daily A-Safir quotes a Hezbollah source as saying that the group “will not rush to decide what steps should be taken.”

Why Did Israel Attack?

Former Chief of IDF intelligence Major-General Amos Yadlin spoke on Israel’s IDF Radio on Monday and estimated that the attack was not against Hezbollah but a move to eliminate any terror threats emanating from the Golan, as Israel does not want to be threatened in another theater.

Hezbollah prefers to operate out of Syria, he explained, because there is a governmental vacuum in Syria, which enables them with a wider range of freedom.

On the other hand, Hezbollah tries to portray itself as the protector of Lebanon against Israeli aggression, and has claimed several times that it does not operate out of other countries. Yesterday’s attack has exposed Hezbollah as a terror organization with international operations. This revelation may cost them domestically and they may lose some support in Lebanon, because the Lebanese do not want to incur Israel’s wrath pouring down on them in Lebanon when Israel attacks in retaliation for a Hezbollah attack executed elsewhere around the globe.

Where Can Hezbollah Hit Israel? 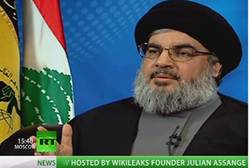 Ibrahim al-Amin, the editor of Al-Akhbar, a pro-Hezbollah newspaper, wrote on Monday that the Shi’ite terror group “will launch between 4,000-5,000 rockets at Israel and will destroy hundreds of targets per day.”

“The enemy’s leadership made a decision to carry out a crime,” Al-Akhbar wrote. “They did this in a direct manner, eyeing a specific target that was engaged in fighting in the Quneitra region. This is more proof that Israel is involved in the fighting in Syria. This is work that is not based on emotion or petty score-settling.”

“In any event, the weapons at Hezbollah’s disposal are there to be used, and not to be stored,” the newspaper wrote. “The response needs to match what it is that the enemy wanted to achieve.”

Hezbollah leader Hassan Nasrallah threatened Israel in an interview with Al-Mayadeen television last Thursday, saying that his organization would retaliate for what he alleges are repeated IDF strikes on Syria.

“The repeated bombings that struck several targets in Syria are a major violation, and we consider that any strike against Syria is a strike against the whole of the resistance axis, not just against Syria,” Nasrallah told the Beirut-based Arab news television.