Israel is seeking $4.2-4.5 billion in annual military grants from the US under the new Foreign Military Financing agreement, a 50% increase over the current deal, in order to maintain its qualitative military edge. 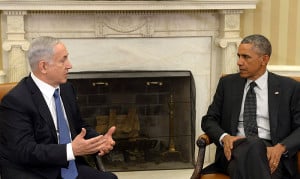 Obama and Netanyahu at the White House. (Avi Ohayon/GPO))

Israel is hoping to get a 50% increase in annual military aid from the US during negotiations to renew the 10-year foreign military financing (FMF) deal. This would raise the amount of aid from $3.1 billion to $4.5 billion in grants.

The American Defense News reports that it was told by an anonymous security source that Israel will be seeking $4.2-4.5 billion in annual FMF aid. Israel and the US have begun preliminary discussions on a new 10-year FMF package to succeed the current agreement, which expires in 2017. The article did not mention whether Israel would renegotiate the terms of the FMF agreement, which states that 74% of all aid must be spent in the US, with only 26% available for procurement from Israeli defense firms.

Israeli and American sources indicated that the increase in aid would be separate from any defense package intended to reassure Israel on the Iranian nuclear deal or to reward it for reaching a peace agreement with the Palestinians. Israeli media reported recently that the US may consider providing advanced military equipment, most likely in the form of a greater number of F-35s, in return for Israel’s silence on Iran.

According to Howard Kohr, head of the American Israel Public Affairs Committee (AIPAC), Israel may need to spend $160 billion on defense in the coming decade. Speaking to the House Appropriations subcommittee on foreign operations last month, Kohr noted that Israel is increasing its spending in parallel with its Arab neighbors, who are also threatened by Iran. Furthermore, Israel must purchase increasingly sophisticated equipment from the US, “including American-built advanced fighter aircraft, vertical takeoff aircraft, naval vessels and armored troop carriers” in order to maintain its qualitative military edge (QME). 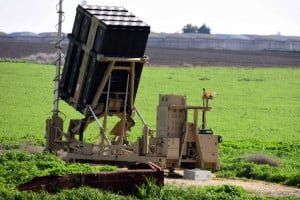 In addition to the FMF grants, Israel receives nearly $500 million annually for joint anti-missile defense programs, most notably Iron Dome. The working draft of the 2016 defense appropriations bill, which sets the Department of Defense’s budget and spending priorities, includes another $487.5 million for additional joint defense programs, including bilateral cooperation on technology to detect terror tunnels.

Israel first became a major recipient of US foreign aid in 1979 after signing a peace treaty with Egypt. As Israel’s economy became stronger, the form of that aid changed from primarily economic to primarily military. It is a matter of pride for Israel that it has never had to call on foreign troops to come to its aid, despite repeated wars intended to destroy the Jewish state. The FMF agreement has provided billions of dollars to over 1,000 companies throughout the US.