Opinion: Can Jews be anti-Semites? A cartoonist proves the point

Eli Valley, whose anti-Israel and anti-Trump cartoons resemble Nazi propaganda, spreads hatred. Nevertheless, he should be denounced, not banned.

There’s an old joke that tells of a person who has been accused of being a self-hating Jew. His response is to tell his accuser that he doesn’t hate himself. It’s other Jews he hates. That’s an apt introduction to the controversy over cartoonist Eli Valley.

For the last decade, Valley’s densely packed, grotesquely illustrated multi-panel cartoons have been spewing anti-Zionist propaganda over the Internet. His work used to appear in Jewish publications like The Forward and Tablet online magazine, but no longer. Still, he remains a popular figure among those who hate Israel and who spread hatred about the Jews.

That’s why Students for Justice in Palestine and Jewish Voice for Peace invited him to speak and exhibit his work at Stanford University this week as part of their “Palestine Awareness Week.” 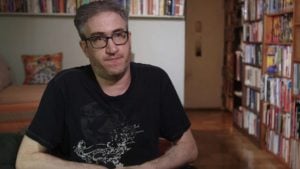 That invitation ignited a bitter debate on the campus that largely centered on his dubious conception of art. His leftist sponsors promoted the event by putting up posters featuring his offensive illustrations attacking Jews, Republicans and Israel by covering up announcements from a Stanford Republican group.

That, in turn, prompted a response from some in the GOP group who posted copies of anti-Semitic cartoons from the Nazi Der Stürmer publication and invited students to try to “spot the difference.”

The point being that Valley’s work is largely indistinguishable from classic Nazi Jew-hatred.

Predictably, that prompted howls of protest from Valley’s Israel-bashing hosts, who claimed it was the Republicans who were spreading anti-Semitism by putting up the Der Stürmer cartoons to demonstrate the comparison to his cartoons. Jewish Voice for Peace eventually apologized for putting up Valley’s cartoons on campus, but its members also doubled down on their support for his work and their commitment to the event.

Valley then spewed even more hate on Twitter about a Stanford Jewish student having the chutzpah to write in the school paper explaining that the cartoonist peddles anti-Semitism. The artist was also angry that New York Times columnist Bari Weiss, whom Valley libeled as a “McCarthyite,” tweeted her support for those standing up to him.

The important point about all of this isn’t about who should or should not be allowed to speak at Stanford or what kind of flyers should be posted on dorm bulletin boards. The problem is the notion that it’s OK to use Nazi-style imagery to promote political opinions that are aligned with the stands of contemporary Jew-haters.

Valley’s use of the Der Stermür style is not an accident. Like all too many on the far left, he thinks that U.S. President Donald Trump and conservative Republicans are Nazis and that their Jewish supporters are Nazi collaborators. But he also believes that Israel is a fascist apartheid state and spares no effort to depict everyone with whom he disagrees—whether it is President Trump, Prime Minister Benjamin Netanyahu or even liberals who are not opposed to Israel’s existence—as Nazi monsters.

He claims that his use of the same tropes as Der Stürmer is legitimate because his work is parody. But that’s a distinction without a difference in cartoons that are thick with allusions to blood libels and in which Jews and Jewish rituals are depicted in the most horrifying manner. He believes it’s just fine to use Nazi imagery in order to skewer Zionists, so as to show the Jews that they are wrong to want to defend their state and oppose anti-Semitism.

Some of his defenders agree and see him as an almost prophetic figure pointing out the sins of Jews who are heedless of their faults.

But that argument breaks down when you consider that the cause he is advocating—the delegitimization of Jewish rights and the elimination of the one Jewish state on the planet—is itself inherently anti-Semitic. It’s not just that his cartoons look like Der Stürmer. The message embedded in them about demonic Jewish figures and their allegedly evil deeds is also very much in line with the point of Der Stürmer’s Nazi propaganda.

Much like Jewish Voice for Peace, which promotes blood libels against pro-Israel Jews, Valley’s illustrations are an attempt to give Jewish cover to Jew-hatred.

Like fellow anti-Semite Rep. Ilhan Omar (D-Minn.), Valley also likes to play the martyr, claiming that he is being persecuted for telling the truth, and smearing his opponents as opponents of free speech or violence because they have the temerity to speak up against him. But criticism of his work is no more a “McCarthyite” attack than attempts to call out Omar for her anti-Semitism is Islamophobia.

Lots in common with synagogue shooters

More importantly, Valley thinks that it’s somehow wrong to compare his work to the Nazis when white-nationalist shooters are killing Jews in synagogues. But while there’s no proof that neo-Nazis are looking at his vile pictures, his claims of innocence ring hollow.

He may not share all of the beliefs of white nationalists, but if they did look at his work, then they’d discover they have a lot in common with him with respect to Israel, Jews and his views of pro-Israel non-Jews like Trump and Meghan McCain.

Valley has every right to publish his filth and to speak wherever he is invited. The right to free speech covers obnoxious speech; it’s just not the kind of language we admire.

Still, that doesn’t give those who publish or defend Valley’s work a pass for legitimizing his repugnant anti-Semitic trash. That is especially true for progressives who say they support Israel but not its government’s policies. Like the Hamas terrorists, Valley recognizes no such distinctions. In his world, Israel is evil and so are the liberals, as well as the conservatives, who love it.

That places all people of good will—Jews and non-Jews alike—under obligation to denounce his use of Nazi-style imagery for purposes that serve the interests of contemporary Jew-haters. He deserves to be treated with the same contempt as the white nationalists who still revere the Der Stürmer stereotypes that he has so disgracefully revived.