Israeli actress Orna Fitousi has made headlines over her refusal to receive the COVID-19 vaccine and her fierce criticism of the government’s handling of the pandemic.

Notable Israeli actress Orna Fitousi was recently fired from the award-winning Israeli show “Manayek” after refusing to receive the COVID-19 vaccine or testing for the virus before arriving on set.

After playing a major role in the show’s first season, the experienced actress will not appear in its second season that will air on Kan.

Fitousi, 53, has made headlines this past year over her refusal to receive the COVID-19 vaccine and her fierce criticism of the government’s handling of the pandemic. A few months ago, she posted on her Facebook page a caricature of Pfizer CEO Albert Bourla gesturing the Nazi salute and saying “Hail Pfizer” with the caption reading, “How is it that Jews are the ones who end up killing other Jews.” 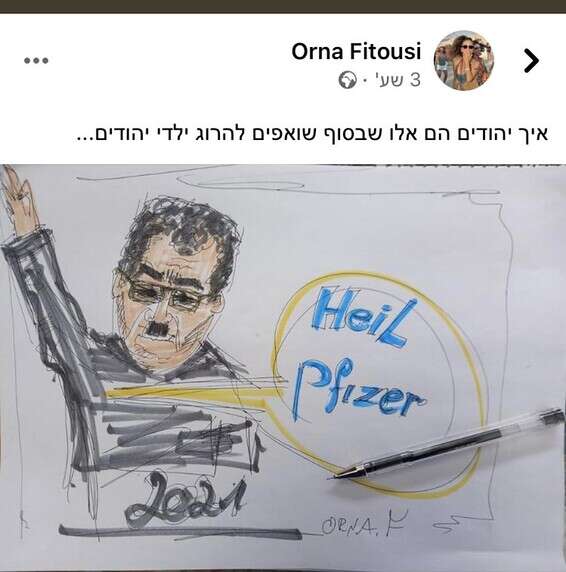 Orna Fitousi’s controversial post, with the caption: “How is it that Jews are the ones who end up killing other Jews” (Facebook screenshot)

She later apologized for the post, but remained active on social media and continued to call on the public to refuse to get vaccinated.

The company producing “Manayek” has reportedly said that it was simply following government guidelines and did not want to endanger other employees on set.

Last week, Fitousi took the manner one step forward and said she had decided to tear her “ADI” organ donation card in protest of what she called “the continued abuse of the Health Ministry against vaccine refuser.”

“A country that denies my basic rights over my body is a country that is not entitled to receive anything from me — not during my life nor after my death,” she wrote.

Fitousi’s post drew criticism, but ironically led to an increase in the number requests for ADI cards among Israelis – probably as a result of the actress raising awareness to the issue.

Fitousi has an impressive repertoire when it comes to acting. She has played in various Israeli TV dramas over the years, including “Srugim,” which dealt with controversial issues in the Religious Zionist society in Israel.