Dreizin’s photos illustrate the bleak reality of life in Washington, D.C., which more closely resembles a third world country than the capital city of the nation with the world’s largest economy.

Photos posted on the personal blog of a U.S. Army veteran show the nation’s capital in a state of shocking disrepair, months after the coronavirus pandemic shuttered businesses and summer 2020 riots rocked the city.

The blogger, Jacob Dreizin, introduces himself by saying, “I am 43 years old, U.S. Army veteran, two Master’s degrees, Deplorable [Trump supporter]…an immigrant, married to an immigrant, a father of three, living with my wonderful family in northern Virginia, 18 miles from Washington, D.C.”

Dreizin’s photos illustrate the bleak reality of life in Washington D.C., which more closely resembles a third world country than the capital city of the nation with the world’s largest economy.

He posts the photos with just a brief title, almost always without a caption, letting the viewers draw conclusions for themselves about the startling images they’re facing.

One photo, simply titled “ATM,” shows a battered bank machine with a smashed glass screen and card reader. From the weathered look of the ATM, it appears that it was destroyed some time ago and that the bank has not invested in repairing it. 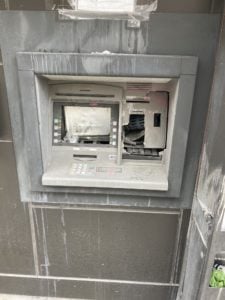 The photo raises questions about the nature of a city in which a financial institution doesn’t choose to fix its own machines.

The photos paint a portrait of a city devastated by unrest. Another photo posted by Dreizin, called “Sidewalk near the White House,” shows a clear connection to the riots in summer 2020. Brick pavers have been pulled up from the sidewalk – presumably for use as projectiles to throw at police, or for vandalism – and leave a gaping, muddy patch in the pedestrian walkway. An abandoned shopping cart and discarded Biden-Harris sign complete the picture.

“Liberal, Jesus-free church across from White House” shows a house of worship with two stories of boarded up windows. It’s unclear if the windows were broken during unrest or if the church had boarded them up in anticipation of vandalism. A prominent “Black Lives Matter” sign hangs on the fence in the church’s front yard. Other photos by Dreizin include an abandoned Starbucks coffee shop in the city center, more missing brick pavers near the White House underneath letters on a fence reading “Defend Black Lives,” and melted-over asphalt and glass, presumably the results of a fire set during the riots.