Iran is the primary backer of terror in the Middle East. It supports the regime in Syria, as well as Hezbollah in Lebanon and the Houthi rebels in Yemen. It is also funding Hamas terrorism against Israel. 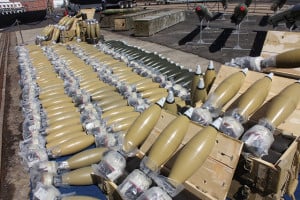 Mortar shells sent by Iran and intercepted by the IDF in 2014. (IDF)

New details have emerged about Iranian efforts to destabilize the Middle East. According to information given by western intelligence officials to Fox News, Unit 190 of the Iranian Revolutionary Guard’s Quds Force is in charge of smuggling weapons to terrorist groups throughout the region, including Hezbollah, Hamas, and the Houthi rebels in Yemen.

The report indicates that Unit 190 is comprised of approximately two-dozen employees under the leadership of Behnam Shahariyari. Shahariyari runs numerous straw companies, which allows the unit to smuggle RPGs, night-vision equipment, and long-range rockets concealed among legal cargo.

It is well-known that Iran uses straw companies for weapons smuggling. “Many times when you see the United States government imposing sanctions on so-called ‘commercial businesses’ in Iran, it’s in reality the Quds Force that they are trying to sanction,” Ali Alfoneh, a political scientist at the Foundation for the Defense of Democracies, told Fox News.

Shahariyari had signed off on a shipment of 122mm mortar shells to Hezbollah that was intercepted by Turkey in 2007. Another Unit 190 member, Sayyed Jobar Hosseini, is the manager of the shipping company, Liner Transport Kish, which was designated by the US Treasury in 2010 for providing weapons and other material support to Hezbollah.

Iran is the primary backer of militant Shi’ism in the Middle East. It supports the Alawite minority government in Syria, as well as Hezbollah in Lebanon and the Houthi rebels in Yemen. It is also funding Hamas terrorism against Israel, though Iran temporarily cut off ties after Hamas took the opposing side in the Syrian civil war.

The Quds Force is a special operations unit of the Revolutionary Guards responsible for operations outside of Iran. It reports directly to Iran’s Supreme Leader, Ayatollah Ali Khamenei.