Do not even try to figure out the motivation of terrorists, who simply are pickled in hatred that simply does not allow for the humanity of “the other.”

By Shoshana Bryen, The Gatestone Institute

It is a lot to process. Omar Mateen, the American-born son of Afghan parents, murdered 50 people and wounded scores of others in a gay nightclub Sunday. The first surprise is that it was not a surprise, especially to the FBI. Mateen was the subject of investigations in 2013 and 2014. “He was a known quantity,” a source said. “He has been on the radar before.” But Assistant Special Agent Ronald Hopper told reporters, “Those interviews turned out to be inconclusive, so there was nothing to keep the investigation going.”

Omar Mateen’s father probably wasn’t terribly surprised. He told NBC News “that his son became angry after seeing two men kissing a few months ago in Miami.” He speculated that could have triggered his decision to kill. “This has nothing to do with religion,” his father added.

President Obama was not exactly surprised, given, he said, the number of guns in America. He called again for gun control and said there was, “no definitive judgment on the precise motivations” of the terrorist.

President Obama’s response might have been a surprise to local police, who, according to CNN, received a 911 call from Mateen pledging his allegiance to ISIS just before the attack. Whether he was actually with ISIS or not, the Islamic State wasted no time blessing him as one of their own.

So where do Americans go with this?

First, pray for the victims and their families, and thank the first responders. 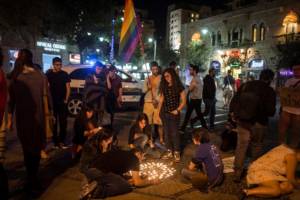 Israelis light candles at Zion Square in Jerusalem in solidarity with the victims of the Orlando shooting attack. (Hadas Parush/Flash90)

Second, do not bother trying to “explain” terrorists, or figure out their “motivation.” They are pickled in hatred that simply does not allow for the humanity of “the other” and insists that individuals exist only as representations of religions, objects, and social or political points of view. There is no other way to explain Shalhevet Pass, a six-month old baby shot in her stroller by a sniper, or Malki Roth, a teenager murdered while eating pizza, or the Fogel children murdered in their beds. There is also no other way to explain shootings at Max Brenner in Tel Aviv or stabbings in Jerusalem; Hamas rockets fired indiscriminately into Israeli towns; gay men thrown off buildings by ISIS in Iraq or dragged behind motorcycles in Gaza; barrel bombs and chlorine gas dropped on civilians by Assad’s Syrian forces; the kidnapping and forcible conversion to Islam of girls by Boko Haram; the sale of Yazidi women and girls as sex slaves by ISIS; and the skinning alive of prisoners by the Taliban. They are all of a piece.

Third, recognize that the same hatreds exist in our country. We imported them — already pickled — and we pickled some of them here. What Mateen’s father said was that seeing what he found unacceptable — men kissing — was enough to make his son kill. Maybe. Maybe not. Either way, what do we need to do about people willing to kill us under those circumstances?

The Heritage Foundation maintains an extremely useful timeline of terrorist plots in the US. It includes the “shoe bomber” (2002), the “underwear bomber” (2010), the Times Square bomber (2010), the Boston Marathon bombers (2013), and the San Bernardino shooters (2015). But there’s more. Here is sampling from a Jewish Policy Center analysis: Medics evacuate a victim from the scene of the Tel Aviv shooting attack on Wednesday. (Moti Karelitz/Flash90)

There were assassination plots against Presidents Bush (2003) and Obama (2011).

The American homeland – free speech, religious institutions, open inquiry in academia, our military and our way of life – is under attack.

America’s blessing is a political system built on tolerance of “the other.” Not all of us, not all the time – remember that we used to buy and sell our fellow human beings – but the principle to which we aspire is tolerance of “the other.” America’s glory is men and women who run into danger while everyone else is running out – without regard for the particulars of who they are saving. It was true on 9-11 and it was true this weekend in Orlando. But our national blind spot is not seeing that we share this lovely space with people who want to kill us for the peculiar people we are.

Shoshana Bryen is senior director of the Jewish Policy Center.