As opposed to Hamas, Fatah did not publish details of its 2021 terror activities.

The two Palestinian groups – Fatah and Hamas – which dominate Palestinian society, have constantly been at loggerheads.

When people and organizations call for “Palestinian reconciliation”, what they are really saying is that even though Hamas openly seeks Israel’s destruction and openly brags about its murderous terror, this should not prevent it from being a legitimate partner within the Palestinian Authority, and thereby open the door for its acceptance as a legitimate political actor within the international community.

While it is well known that Hamas, an internationally designated terror organization, controls the Gaza Strip, what is less publicized is the fact that the group enjoys substantial popular support in Judea and Samaria/the “West Bank” where its terrorists carry out thousands of terror attacks every year.

To celebrate its terror and to mark the New Year, Hamas published a flier boasting of the number of terror attacks carried out by the organization in Judea and Samaria in 2021.

Of the 10,850 “resistance operations” – the Palestinian euphemism for acts of terror – 441 were “quality operations” apparently including “191 shootings”, “62 stabbings and car-rammings” and “55 [incidents of] planting and detonating explosives.”

The flier also noted that Hamas terrorists participated in “4,100 [cases of] throwing rocks and firebombs” and “4,700 confrontations and stopping the settlers”: 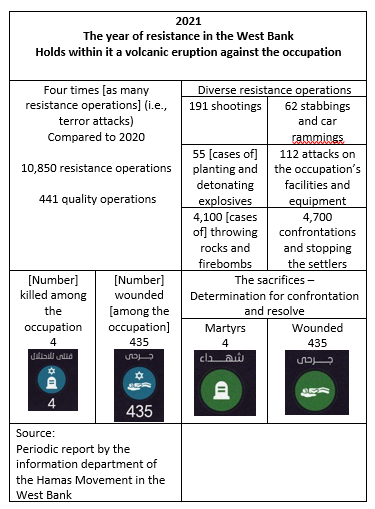 While the flier tries to create symmetry with 4 terrorists and 4 Israelis being killed and 435 injured terrorists against 435 wounded Israelis, this is an anomaly.

In 2021 there were actually 16 Israelis and others murdered by Palestinian terrorists. 13 were killed during the May 2021 missile and rocket attacks launched by Hamas. Among the victims were 5-year-old Ido Avigal, 84-year-old Miriam Arie, and 3 foreigners working in Israel. The number of Israelis wounded by Hamas terrorists is unclear.

Similarly, it is unclear how many Hamas terrorists were actually killed and how many were wounded.

As opposed to Hamas, Fatah did not publish details of its 2021 terror activities.

While Fatah and Hamas have always been political rivals, the rivalry intensified starting in 2006 when Hamas won the last general elections held in the PA. Despite the electoral victory, soon after its formation, PA Chairman Mahmoud decided to depose the Hamas government.

Hamas responded to Abbas in the summer of 2007 by violently ceasing control of the Gaza Strip, in some instances, throwing Fatah officials to their deaths from the tops of buildings.

Numerous attempts to bring about a Fatah-Hamas “reconciliation” have all failed. When Abbas realized that Hamas would again win the general elections he called for May 2021, he simply decided to cancel them. Hamas responded to the cancellation by firing 4,500 missiles and rockets into Israel indiscriminately targeting Israel’s civilian population.

The divided Palestinian leadership presents the international community with a dilemma – who actually speaks for the Palestinians? Is it Fatah, who despite being deposed over 15 years ago, still controls the PA purse strings and mechanisms and maintains effective control of the PA areas in Judea and Samaria? Or is it Hamas who won the 2006 elections and maintain effective control over the Gaza Strip?

Shockingly, instead of demanding that Hamas refrain from terror and demanding that the PA effectively confront Hamas terror, many international actors such as EU High Representative/Vice-President Josep Borrell stress “the need for Palestinian factions to resume serious efforts towards intra-Palestinian reconciliation.” [Website of the Office of the European Union Representative (West Bank and Gaza Strip, UNRWA), Oct. 27, 2021]

When calling for Palestinian “reconciliation,” what Borell and many others like him are really saying is that Hamas – an internationally recognized homicidal terrorist organization that openly calls for Israel’s destruction and which uses terror on a daily basis – is a legitimate actor within Palestinian society and the international community.

When important international actors not only lack the moral fiber to condemn terror but actively promote the inclusion of Palestinian terrorists in the Palestinian leadership, they are doing nothing to promote peace. Rather they are promoting hate, legitimizing terror and guaranteeing continued conflict.