The body of a 19-year-old student was found near Hebron. He has been identified as Dvir Sorek.

The Israel Defense Forces said that the body of a student, also serving as an IDF soldier, was found in the early hours of Thursday morning with stab wounds near the city of Hebron. He was identified as Dvir Sorek, 19, from the town of Ofra.

“The soldier was a student in a yeshiva, at the first stage of his military service. Our troops together with Israeli security forces are searching the area,” the IDF reported.

IDF Spokesman Ronen Manelis said that a missing 19-year-old was reported during the night. Troops called into the area discovered his body not far from the yeshiva, Hesder Beren-Machanaim in Migdal Oz, where he studied. Migdal Oz is located in Gush Etzion.

“We are beginning to carry out steps on the working assumption that there is a terrorist cell in the area that carried out the attack,” Manelis said.

Sorek’s family were the ones who called in the report after not being able to make contact with him. His body was found at around 2:30 a.m. 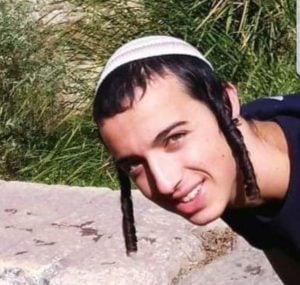 The IDF suspects that this was an attempted kidnapping and that Sorek was killed in a place different from where he was found. Israel security forces say they believe he was taken in a vehicle and dumped along the side of the road.

Rabbi Shlomo Vilk told Army Radio on Thursday that Sorek “had gone to Jerusalem to buy presents for his rabbis as was his wont as a token of gratitude, and on the way back this horrific attack happened.”

“He was found embracing the books that he had bought,” the rabbi added.

Prime Minister Benjamin Netanyahu said that security forces were “in pursuit now in order to capture the despicable terrorist and bring him to account.”